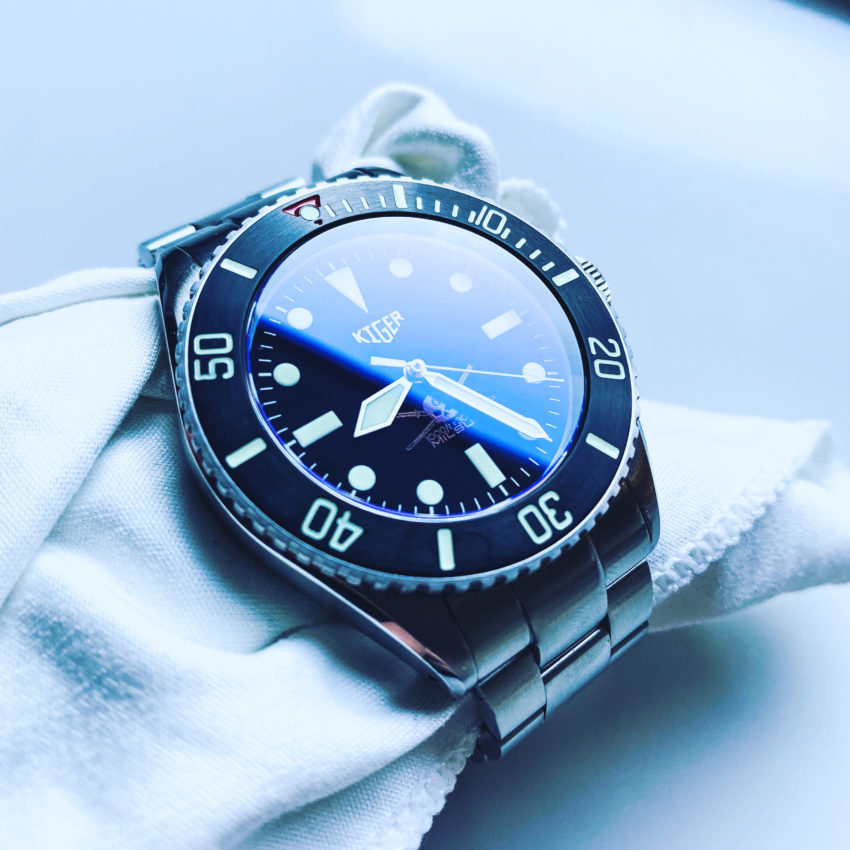 With the intention of posting at least once a week, I’m hereby introducing a new post format that (I hope) I’ll have a chance to do regularly (depending on what watches come my way). Here’s a brief, unboxing review of my latest watch: the Kiger Milsub (RRP $650)

At a glance, the watch looks like the Rolex 5517 Submariner from the 1970’s that got the famous nickname Milsub (the words Military Submersible being shortened into one word.) The original Milsub came as a result from a military specification from the British Armed Forces, where other watch makers also made their contributions. A curious detail is that the 5517 sports sword hands as opposed to the regular Mercedes hands found on the Submariner.

Just like the GMT-Master II being called Pepsi, Batman, Batgirl, Root Beer, etc. depending on the color scheme, the trademark of the nickname Milsub was never part of Rolex’ possession. This is what Mark Kiger realized about a decade ago when founding his nano brand Kiger Watches.

Kiger duly applied for the Milsub trademark in the US. It was granted and has been in use by his company since the inception. While the obvious design similarities between the Kiger and the original Milsub are clear, what really invoked Rolex’ attention recently was the trademark the watch was sold under. The result: a lawsuit. Click here for a comprehensive article by wristwatchreview.com.

Wait, what? Sued by Rolex?

Yes. Rolex has sued to Kiger watches for what seems to be a legitimate use of a trademark. One could speculate how this would apply to the GMT-Master II / Pepsi case. Who would sue whom? Kiger Watches has since its inception delivered about 100 pieces, so we’re talking about a very small company here. In fact, Kiger has very little social media presence let alone a web page. Not really how you would imagine a company with a strong commercial profile would appear. And that’s also the reality. Since 2015, Kiger has only released one watch: the 47 pieces limited edition Kiger Milsub Red Ronin.

The Red Ronin is an NTH watch made for Kiger, with a crossed red katana logo on the dial and the same engraved on the case back. The reference is to the 47 Ronin revenge, a historical event in Japan where a band of leaderless samurai avenged their dead leader Asano.

In addition to the katanas in the logo, the watch is limited to 47 numbered pieces. I got number 31 after having bought it directly via Mark Kiger in a microbrand forum. All remaining stock was sold out in two days after the article in wristwatchreview.com.

The watch comes in a clever slide box with a nicely designed cover. No frills, befitting a non-luxury piece. What strikes me first is the solid bracelet which breathes of high quality. Normally, watches in this price range almost always sacrifice the bracelet over all other things that cost good money to make. NTH is well renown for its high quality, so I shouldn’t have been surprised. Yet, the first impression via the solid bracelet sets the tone for a positive experience.

The watch in brief

Let’s start with the specs. 40mm case and 20/18mm bracelet in 316L stainless steel. Domed sapphire glass, 300m water resistance, a palette of C3 lume and finally a Miyota 9015 movement. The movement was my second impression since I missed out the change from ETA to Miyota. I thus reacted to the watch sounding like a tractor with a combine. Before getting the confirmation from Mark, I noticed the slim case height (11.5mm) and concluded that the 9015 was probably the only explanation to the sound. No quantity has been spared on the C3 lume application, making it the most glowing piece in my box without contest.

Not going to further describe what can be taken from the pictures, let’s move on to…

As related from my previous post, I sold off all my 40mm watches. It therefore comes as little surprise that the Milsub wears small on me. The first day, it was worn 10 minutes but after a couple of weeks I’m now getting more used to it. In fact, I start appreciating the piece as a nice alternative to my 44mm chunks of submarine steel. The comfortable height makes it slip inside the cuff.

The Kiger Milsub is a quality watch. The painted indexes are a small detail that together with all the other design choices makes it a complete watch. As opposed to all other 5517 pastiches out there, the Kiger rightly bears the name Milsub. I’m not trying to fool myself or anyone else: it is a pastiche. But it is a well-made pastiche with a nice twist, further emphasized by the lawsuit. Quoting Mark Kiger: “I never thought my watch would be a collectible”. There are also the Red Roning details on the dial and the nice case back, that gives the watch this little extra that many pastiches often lack.

With moving into a new house, I didn’t really consider any new watches for the time being. However, wanting to support the little man and loving the story, I’m happy that I jumped on the opportunity to get this piece. One might wonder about the future of the brand and the case. I asked Kiger about the lawsuit and he says “I don’t think they realize I have only ever release[d] 100 watches in 3 versions and four dials”.

Whatever way you turn and twist, the Rolex lawsuit will be a factor for Kiger. I bet it will play out as either Rolex burying Kiger in legal costs, making the watchmaker go under. Another scenario is that the trademark is either purchased or a big settlement is made with the result of the trademark not being used by Kiger any longer. Bottom line: there won’t be many Kiger Milsub watches to come around and hence owning one feels oddly rewarding. Being a quality watch, I will do my very best for this piece to live outside of the watch box. Or as Mark Kiger said it himself: “The watches are going to [be] more collectible than I ever thought they would be”.