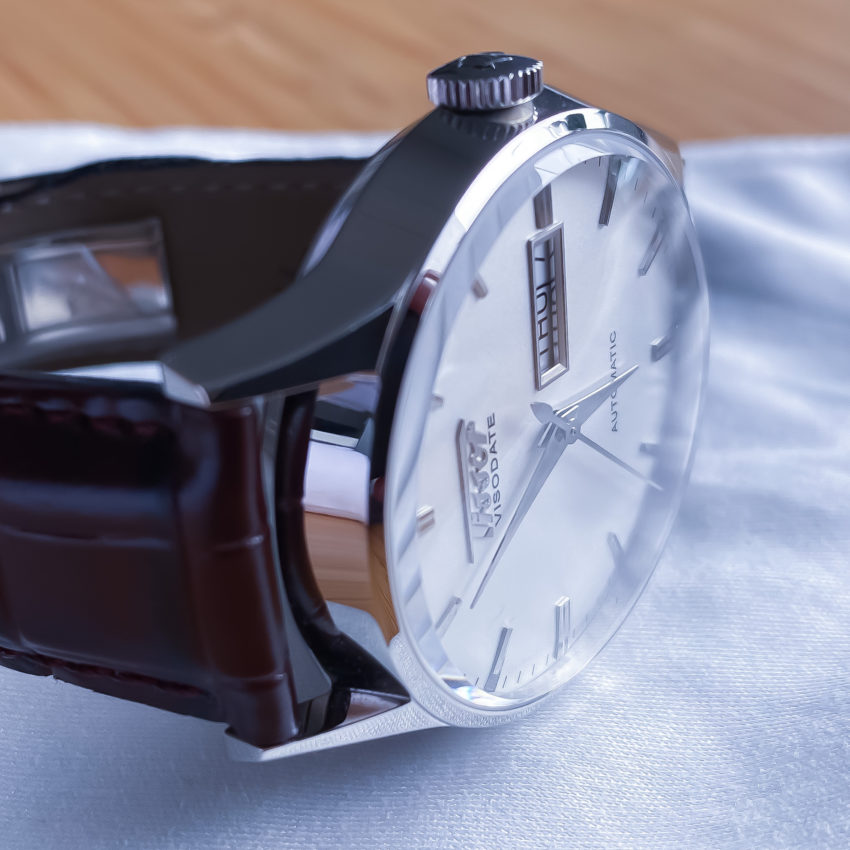 In this post I’ll look at the the honeymoon phase, seller’s remorse and how one’s preferences develop and change. Three very different watches are featured in this post and at least one of them I thought I’d never sell. Three things they have in common is the diameter: 40mm.

People interested in watches often do the mistake to only focus on the higher end, expensive luxury watches. Well renown brands with a legacy and heritage tend to get overlooked. Wonderful watch experiences are lost consequently. Tissot is a brand that sometimes lose out due to its position in lower mid-range. As related in my review of the Tissot Seastar, it punches well over its weight. So, too, does the Tissot Visodate. The Visodate is a window to the past with its classic design and by way of the old Tissot logotype on the dial. Sporting day and date windows at 3 o’clock along a white/silver dial, it becomes a very classy piece with its shiny, polished case.

I got the Visodate with the idea of wearing it for work. I loved the day date function and thought that the classic, borderline vintage look would be a nice everyday watch in the office. Unfortunately, the negatives approached one by one. The first issue was the strap and buckle. Although it’s of good quality leather and looks nice by itself, the thickness/width ratio didn’t make it look great. After trying various combinations, I ended up matching the watch with a black sailcloth strap.

As insignificant as it may sound, the shiny case intersecting with the domed glass gave very strong reflections of the sun when driving. This led to at least one point of irritation every sunny morning on my way to work.

The final nail in the coffin was its small size. While 40mm is a decent size in many respects, the tapered case makes the dial appear smaller than it would need to. After wearing it less and less, I ended up selling it with a good loss considering I bought it new.

As related from my review of this watch, it ended up spending more time in the box than on the wrist. As for the Visodate, the size but also the challenge in pairing it with a suitable strap option led to its eventual fate. The point that really pushed the decision in the end was the general lack of enthusiasm in large part created by the obvious quality perks of the watch and the marketing approach by the brand.

Having that said, the Yema Superman is a cool watch and not only because of its name. The beautiful sunburst dial and sapphire crystal glass really made this watch. Owning this watch was very much like my experience with the Visodate. I never really experienced a deep honeymoon phase. Instead, I was merely grateful for having secured what I thought (and still think) was a nice limited edition of an iconic watch. Its beautiful, azure blue sunburst dial is the only thing I can sometimes miss.

Watches are supposed to be worn and enjoyed. In the end, this was neither and it had to go.

A talented photographer, writer and avid Ollech & Wajs fan, Anders (www.achickenwristsdelight.com) inspired me to eventually pull the trigger on the P-101 S. I found this watch going perfectly with the Zuludiver Combat NATO strap and it got a fair amount of wrist time. In contrast to the Yema Superman, the P-101 is of top quality. It had a few design quirks that I presume come from the brand’s quite long break in designing watches. Its original and innovative hands design and the beautiful case are probably two of the watches most appealing aspects.

It took me some time to realize why it got less and less wrist time. As for the above watches, the size became a matter as I’ve gotten used to and fee more comfortable with larger watches (42-44mm diameter). Still, the P-101 has an unusually long lug-to-lug width compared to the diameter and may thus appear to wear larger. Realizing that it was a far too fine watch to just have laying around, I decided to let it go in order to finance something else.

I plan to release a review of this wonderful piece shortly.

Although I have average-sized wrists (7”), 40mm diameter watches wear small on me. (Obviously, this hasn’t stopped me from getting new watches in this size, since I got the Kiger Milsub.) Diameter alone is far from the only or even main culprit here. 40mm means almost always a lug width of 20mm or less, which means straps that 20-18mm wide. Apparently, I prefer the upper size – for example I’m not the slightest bothered by my 24/24mm Isofrane strap on the Komrade White Pointer.

Learning #2: No honeymoon, no keeper

Common for all three watches is that there was little to no honeymoon feelings after getting them. I’m not saying that this is a good token or signal for how to assess the watch, I’m just saying it happened for me in these three watches. What I am saying, however, is that this is a very expensive way of judging one’s preference to watches. As for the previous post in this series, I still advise buying watches used to try them out (and keep). For example, all my three Sinn U1’s were bought second hand and won’t leave my collection.

To this day, I still haven’t regretted selling any watch. All things being equal, this is perhaps one of the most significant confirmations as to making the right choice to let the pieces go. In the watch community, seller’s remorse can be quite expensive.

Seller’s remorse is not necessarily a bad thing, though. It can be part of a bigger learning, where one’s preferences become clear.

All three watches in this post are solid mid-range watches bought with purpose, to wear and keep. All three watches are quite different in most aspects and have been fun to explore. What sometimes is referred to as a watch journey is not necessarily about acquiring, owning (and selling) various watches. I think it is more a journey on a path of learning and development, where one can learn about watches, preferences and different ways to view the world.