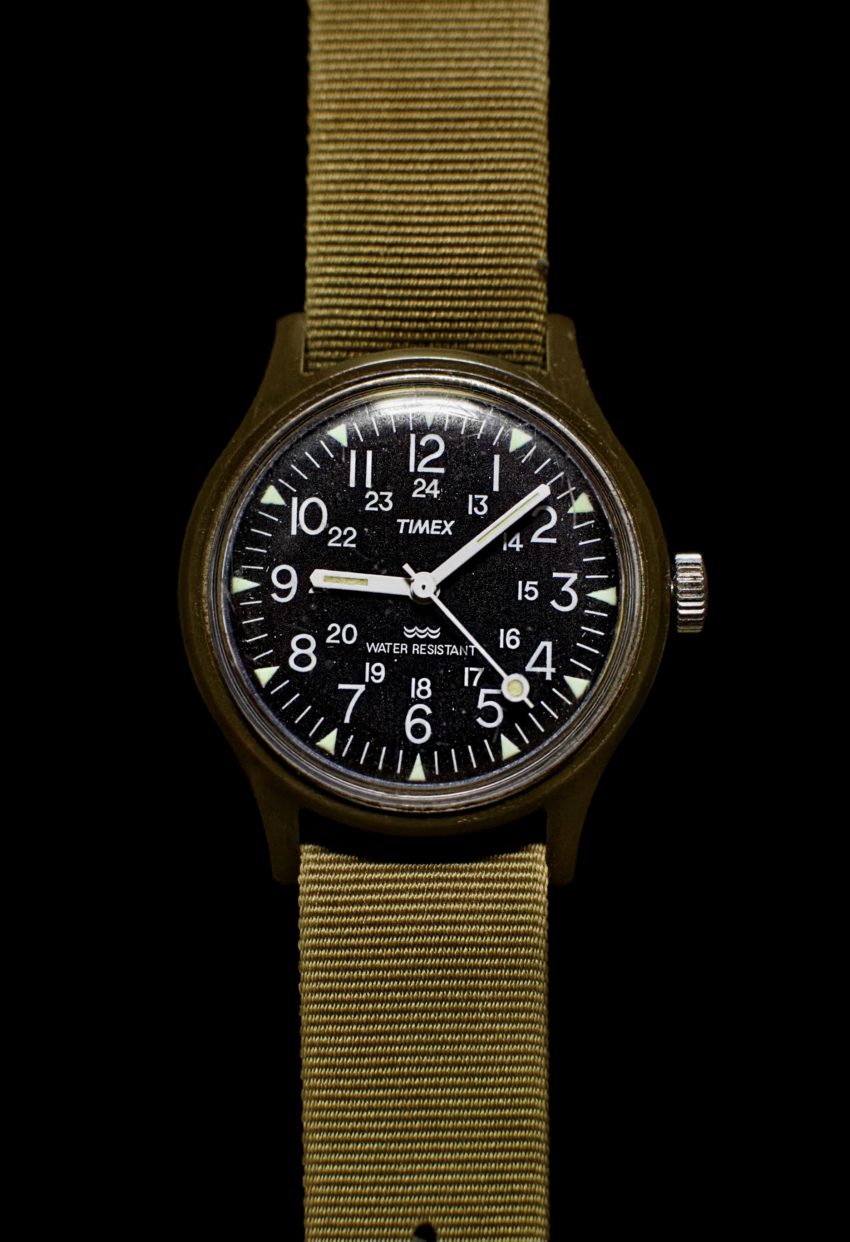 Many of us have read “A Man and His Watch.” It has become essential reading for the watch enthusiast, as its memoir format eloquently captures our deeply personal fascination with watches. However, it leaves the lasting impression that one must be male, famous, successful, or a noteworthy person in the world of watches to be included in its pages. When Leonard asked me to join Joe & Watches as Writer and Co-Editor, I saw an opportunity to build a platform for passionate, independent voices with the only prerequisite being the desire to produce great work. To express this ethos, and introduce myself, I want to take you back to the beginning, when my watch journey began.

We pride ourselves on knowing everything about our watches, but I didn’t know much at all about my first watch. This Timex Camper was a gift from my mother on Christmas, 1985, intended to help me be a more punctual 9-year-old boy. I didn’t know the diameter, the movement, type of lume, or that MacGuyver wore it. All I knew was that I had to wind it every day and it was meant for a soldier. Riding dirt bikes through the suburban streets, playing tag in the woods with my friends, and getting beaten up at school, where I hadn’t spoken a word in front of anyone since second grade, I wore my watch like a soldier.

Late at night, I’d wake up, gaze in fascination under the covers at the fading lume, and dream about being a different person: older, more confident, decisive, a fighter unafraid of standing up for myself. With a blue ballpoint pen, I dug my initials into the green nylon band to claim my watch, but it might as well have been a contract I signed with myself to be stronger. It took a while, but I achieved those things. In 1987, before my 11th birthday, I started talking in school again and stood up to my bullies whenever they came after me, but I was still afraid.

When a bigger, older kid who had been nice to me during my silent years stood over me one day and asked to borrow my watch, I buckled and handed it over. Just like that. For weeks, he’d been telling me how “rad” my watch was and kept asking me where I got it. I suppose he finally got tired of dropping hints. “I’ll give it back next week,” he said, casually cinching the strap to his wrist. The rest of the day, I habitually flicked my wrist to check the time, only to be disappointed by a dirt-encrusted tan line. I felt naked, but worse, I’d betrayed myself.

A week came and went, and every time I saw this kid pass in the hallway, wearing my watch, I felt sick with rage. Yet, whenever I verged upon the courage to demand it back, he seemed to grow taller and stronger with my watch on his wrist. Weeks later, my watch was gone, and for the next few days, his wrist remained barren. As we passed in the hallway between classes one day, I fought back the fear and approached him.

“Where’s my watch?” I asked, my voice shaking.

Though I’d handed my watch to him freely, I knew in my heart it had been stolen.

Sometime later, a watch that looked suspiciously like mine appeared on his wrist. Without thinking, I stood in front of him in the hallway.

“This one’s mine. I finally got one.”

I was so nervous, I could hear my pulse pounding in my ears.

“It looks kinda beaten up… If you show me the strap and my initials aren’t there, I’ll leave you alone.”

For some reason I’ll never know, he turned over his wrist without protest. There in the fluorescent light were my faded, runny, blue ballpoint initials. Without a word, he sighed in resignation, took the watch off his wrist, and handed it back.

“Take good care of her. She served me well.”

Giddy with pride, hopped up on adrenaline, and confused by his unusually mature phrasing, I returned the watch home to my wrist, and didn’t take it off again until it stopped ticking not long afterwards.

I’d love to tell you the watch in the photo is the same one from my story, but mine is long gone. After all, who needs a cheap, disposable, plastic watch that doesn’t work and can’t be repaired? When I recently bought another 1980’s Timex Camper from someone else’s past, it failed to fill the void. Not only was this watch on my wrist when I started becoming a man, but it played a central role in my transformation. It had my initials on the band, and my scratches on the crystal, but now it’s under decades of garbage in a New Jersey landfill.

This regret has ignited my love of watches: forming new bonds with them, being a good steward of the pieces I own, and now, writing about them for Joe & Watches. Like many of you, I’m an enthusiast and an eternal student, not an expert. My perspective as a professional filmmaker with a background in writing, photography, art, and design, manifests in a need to communicate and share ideas. It is my sincere goal that my contributions will add to the richness of the experience here at Joe & Watches.