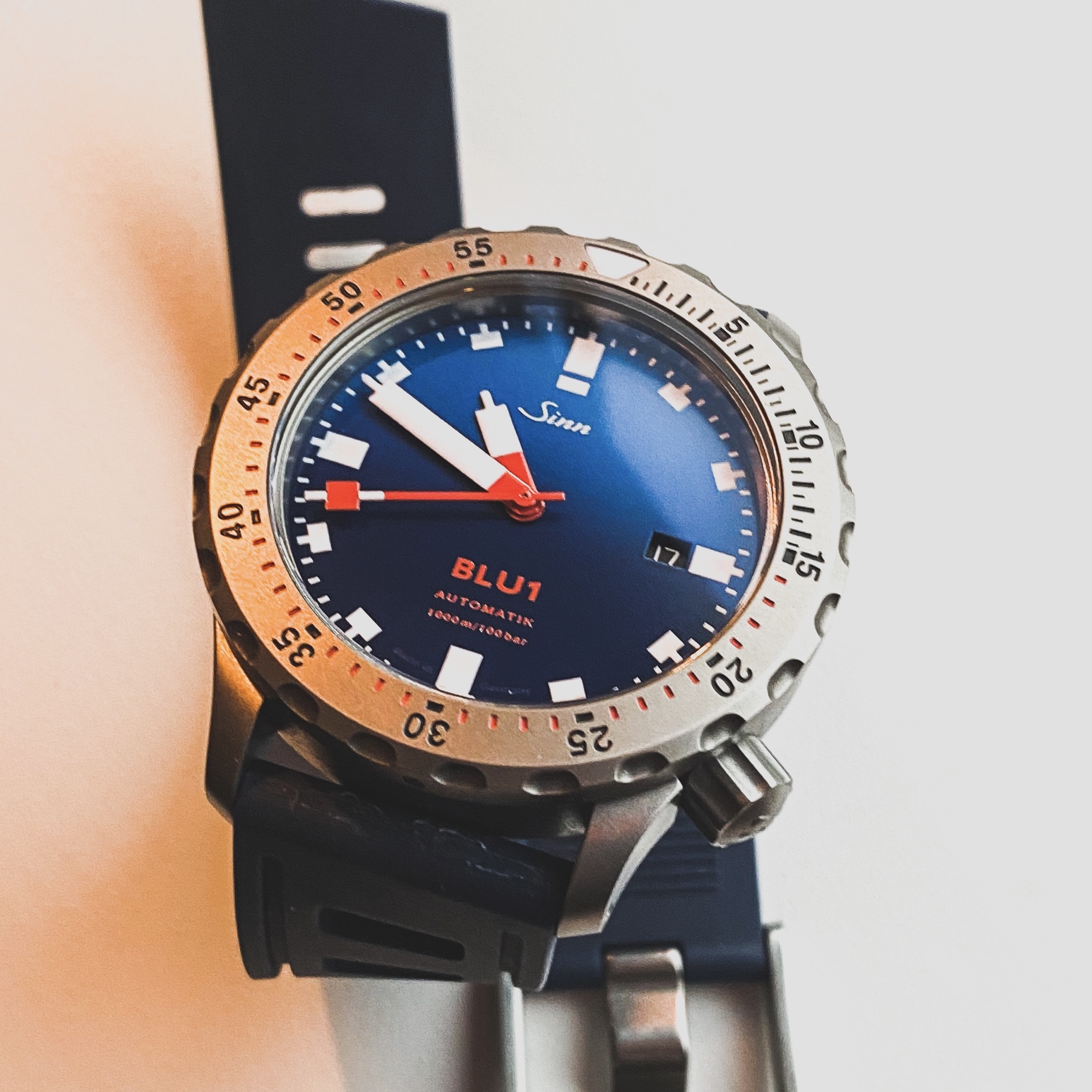 There was something special about trying on a brand-new watch again. By that time last year, I had walked past the luxury watch shop in the Zürich airport a number of times already. This time I allowed myself some time to browse. It was a TagHeuer Carrera, similar to mine, but with a beautiful blue sunburst disc and details. I was about to buy it there and then. It would have been a perfect watch to rotate with my “one-watch” watch. I noticed that after eight years of more or less daily use, it started to get worn. It wouldn’t last another ten years if I kept (ab)using it to that extent. Having another really nice watch would then be a good complement for nicer occasions. I decided to keep my cool and think it through.

The first thing I did after my experience in Zürich was to join one of the biggest watch communities in Scandinavia. It started appear to me that maybe I wasn’t just after another watch for rotation. An aroused curiosity, vivid impressions and a new interest to cultivate.

If someone asked me a year ago what my “watch plans” would be for the next year, I probably would have answered that I was after getting one or two more watches. That proved, however, to be very wrong for two reasons. The first reason was that I was overwhelmed by the abundance of fantastic watches and designs. Second, playing around on the second-hand market is extremely fun. Some people call it madness.

Looking at the present, I own significantly more than “one or two” more watches. In addition, I’ve sold off a bunch of watches. I’ve made quite a few learnings; some have been more costly than others. I’ve met a lot of really interesting people that I wouldn’t have met otherwise. And above all, through this absurdly introspective hobby, I’ve also gotten to know myself better.

Although I love taking pictures of my watches and have a lucky strike evon a rare occasion, my photo game is nowhere near that of those who I admire. I love writing – perhaps even more – and I’ve had a lot of fun writing posts here since the summer.

Joe & Watches will continue publishing on its current platforms; minimum monthly here on the web page, and daily on Instagram. There are several people that have asked or encouraged me to also post video reviews. I haven’t made up my mind completely so there’s no set start for that yet. I’ve been very keen about a book project, which has started to materialize itself.

Being active in my local watch community is great fun – meeting interesting people and checking out nice time pieces is a nice combination. I’m going to arrange at least two get-togethers next year and perhaps attend to some also. Let’s see what happens with the pandemic first.

I have some ideas and thoughts about what I want Joe & Watches to become. I realize that there are some shortcuts that I’m not willing to take, thereby accepting that it will take longer time to achieve. Being in no hurry and believing firmly that a foundation well-built will last longer, I think this is quite okay.

One thing is certain, though. More awareness makes better decisions. That also applies to watches. Joe & Watches will continue to be an inspiration for understanding watches, designs, design elements and other aspects that may create further awareness for anyone who is interested in obtaining a watch. Maybe it’s more than just the allure of the brand that might arouse a different kind of enthusiasm. The inception of Joe & Watches has primarily been various watch reviews of watches that have come my way.

Maybe a bit of a negative notation, but part of the process of understanding one’s preferences is to uncover what doesn’t press one’s buttons. Here are five things I found out about over the last year.

Small watches. There is a narrow, but distinct line between 40mm and 41mm diameter. For example, my TagHeuer Carrera is 41mm and wears like a dream. All watches of 40mm that I’ve tried over this year have gone. And 40mm is by no means small and I have by no means large wrists. Still, this is my preference and judged simply by the fact that the 40mm watches end up staying on the box and subseqently sold.

Mercedes hands. I have never had any specific fascination over Rolex (nor Breitling or Omega for that matter). I thought it had to do with the image of the brand, but have come to realize that one important design element that I really don’t like is the Mercedes hands. One of my first watches over the last year was a Seiko SKX007 YM mod with black Mercedes hands. I stopped wearing it because the case geometry didn’t fit my wrist but realized also that I disliked its hands. Good to know.

Homage watches. After more than a century of wrist watches, there are few designs and design elements that haven’t been tried out. Only the imagination is the limit of creating a design and the potential of ideas is by far depleted. Nevertheless, some designs are more successful (or at least appealing to the broader market) than others. I am a big fan of innovation and applaud any entrepreneur venturing into the highly competitive market of watches. Watches and watchmakers that copy established watch designs and justify their business by calling them homages doesn’t press my buttons. Recently, a guy asked for advice about a specific homage watch brand with the pretext that he’d never afford the real deal. The best advice he got was someone listing original watches in the same price range. Having that said; I don’t judge anyone wearing an homage watch. Rather a legitimate homage watch than a fake watch.

Watch reviews. The inception of this blog came from a frustration over watch reviews that I typically have when reading reviews about motorcycles. The common denominators are that the reviews are short, shallow, listing information that is easily available from the manufacturer and finally, overly positive. I can’t remember how many times I’ve read and heard “awesome”, “great”, “stunning” and “fantastic” in watch reviews. I’ve obviously taken it too far, and after careful consideration of the feedback from my few readers, I limit the reviews to 3000 words or less.

5 things I realized that I really LOVE

I’m mostly a very positive and energetic person, so let’s counterbalance the previous section with some positives on the topic of watches.

Canvas straps. I can think of few combinations that are nicer than a very high-quality watch, with a perfectly manufactured finishing combined with a canvas strap.

Watch people. Just like in most other communities, there’s a fair share of bad apples in the watch community too. However, I still feel there’s an abundance of supporting and positive comments. I think that the watch community has understood that people have different taste and respect them for it in a very nice way. I hope this can be of inspiration to others too.

Purposeful watch choices. Having more than one or two watches enables matching the choice of watch with whatever activity you’re up to. I used to wear my sports watch for everything between going to the beach, to building my house. Now I have at least three watches that have specific purposes. This is practical and very enjoyable at the same time!

Pictures. If there is one thing that has amazed me almost as much as nice watches, is all the incredible pictures that I’ve been seeing over the last year. There are some guys that master the combination of light, arrangement, gear and adjustment! Anders Törmä, Espen Haugland, Christian Kirkemo and Lars Erik are some of the notable photographers.

For next year, there are two watches that are on my list: Tudor Pelagos and Bragdur Stål.

The “Pelly” is for my birthday and I’m excited about having that watch again. It’s one the most awesome watches and, perhaps the definition of a precision diver if you ask me. The Bragdur Stål is scheduled to be launched on kickstarter next year and it’s a “must-have” for me as a Bragdur fan.

There is a third watch on the list that I’m by no means in a hurry to get, but should the right deal come up I’d consider it strongly. The watch in question is the Sinn U1 B, which has been on my list for a long time.

In addition to these, I might play around a bit on the second-hand market also but am not going to commit any major sums there.